Africa Fighting A Good Fight In The War Against The Virus

Covid-19 claimed yet another victim this week when it was announced that the ground-breaking Africa Continental Free Trade Area’s launch is to be postponed.

The Free Trade Area, which was due to create an African single market of 1.2 billion people from this July, is now on ice until next year.

Frustrating as that is for policy-makers who estimate that the AfCFTA will boost the continent’s GDP by three trillion dollars – the postponement is perhaps further indication that African leaders are taking their fight to defeat coronavirus very seriously.

On the whole, the response of African countries to the Covid-19 pandemic has been impressive and effective. Each of the continent’s 54 countries has implemented different strategies for combatting the virus but the common theme is that they all saw the danger early and reacted swiftly.

In March Nigeria closed its borders, banned all international flights, and restricted movement within the country including lockdowns of its major cities of Lagos and Abuja. The state of Lagos has also just made the wearing of masks compulsory.

Arguably South Africa has reacted faster and more efficiently than the USA and many countries in Europe. Unlike the US, Italy, Spain and the UK President Cyril Ramaphosa imposed probably one of the harshest national lockdowns in the world.

Before a single death had been recorded he deployed the army, launched widespread tracing and testing for the virus, and his lockdown prohibited jogging, dog-walking, and sales of alcohol and cigarettes.

It was a very strange experience watching the prime time BBC television News last week and hearing all about the UK’s government’s perceived failures and the criticism that it was slow to impose a lockdown, slow to provide frontline medical workers with sufficient protective masks and gowns, and slow to deliver enough test-kits to its key workers- and then the next report went to South Africa and a film demonstrating how it was already addressing these issues.

Of course, things could deteriorate rapidly. Most African countries have fragile health systems. There are just two ventilators in South Sudan, four in Senegal, and none at all in ten African countries. Although the continent has recorded around a relatively low number of approximately 1,500 deaths so far, The World Health Organisation has predicted the virus could kill more than 300,000 people in Africa and could push around thirty million people below the poverty line.

This twin threat of overwhelmed hospitals and economic recession helps explain why African leaders have taken Covid-19 so seriously and have acted so promptly. The African Union may have postponed the launch of the free trade area but in its place, it has prioritized the creation of a Coronavirus Emergency Task Team created by South Africa’s President Ramaphosa.

It has been charged with addressing the continent’s health crisis, but equally importantly working out how healthcare gets placed at the heart of trade and economic regeneration.

The Task Team wants to make better health provision central to the postponed Free Trade Agreement’s remit, enabling Africa to work towards self-sufficiency in generic medicines and to tap into regional supply chains for the manufacturing of ventilators and other medical equipment.

There is also provision for better infrastructure – more hospitals, more doctors, more nurses, and a bigger shift towards the use of digital diagnosis for rural areas and preventative healthcare.

The Secretary-General of the AfCFTA Wamkele Mene says the postponement allows this longer-term planning about how the AfCFTA can enhance the continent’s preparedness to fight future pandemics:

“We have to start looking at how trade can support public health. Africa should not despair and fall into despondency – from a trade perspective, we should see this crisis as an opportunity.

“ Through the AfCFTA we have an opportunity to reconfigure our supply chains, to reduce reliance on others and to expedite the establishment of regional value chains that will boost intra-Africa trade”.

The Covid-19 pandemic may have knocked-out  Africa’s free trade dreams for this year – but in January 2021 when a redesigned AfCFTA comes out for round two it’s likely to be a much more formidable opponent. 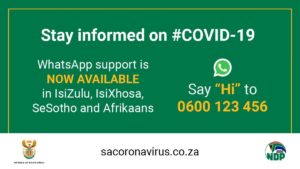